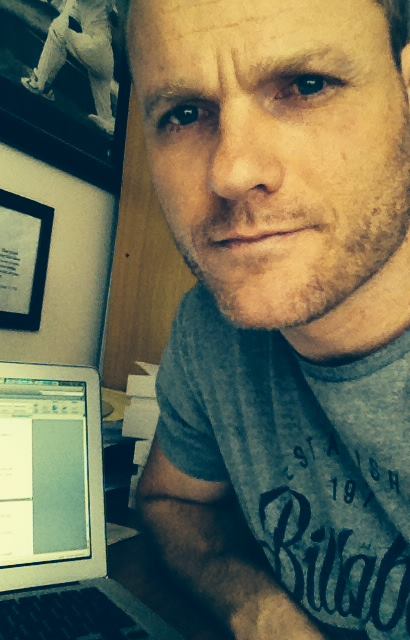 As a follow up to my recent Book Review on the Invasion of the Dead series by Owen Baillie, I’ve decided to do an author interview! This is my first attempt at interviewing a writer and Owen has been gracious enough to play along. I’ve known Owen for a short while now and have had the pleasure of being a Beta Reader for him on both Escape (book
three of the I.O.T.D series) and his recent novel Murder Inc.

Firstly, thank you for taking the time to answer a few questions about life as a writer. Can I start by asking when you decided to become a writer – to just sit down & start? Can you recall for us the first thing that you wrote?

I’ve always loved stories and from my late teens I told myself I would write a book one day, but had zero idea on what that actually meant. So about the start of 1998 I finished The Green Mile and I was just taken with the story. It was brilliant and I thought if I could somehow give people that kind of feeling, it would be an incredible thing.

Heavily influenced by the amazing Mr. King, I sat down and wrote a story. A story about a kid who turns into a kind of monster and gets hunted down by the police. The words terrible, pathetic, and horrid come to mind when I think of this. For some reason, I kept writing, even after I finished. And I just didn’t stop.

Do you still have a copy of that first story you wrote?

I have copies of every story I’ve ever written, including all the trash, and a couple of first drafts that ran well over 100,000 words. Mostly short stories though.

I’m working on the fourth book in my Invasion of the Dead series. It’s essentially a virus sweeping through the world, but I focus on the east coast of Australia, primarily Albury, and then the surviving characters make their way south. Books 1-3 follow a particular group. Book four focuses on a new group in Tasmania.

Would you say that you are drawn to a particular genre for your novels? And if so, why?

I can read in most genres, but I’m drawn to horror and sci-fi mostly. I love the supernatural. When I was a young kid at primary school I remember tracking down books on Godzilla, the wolf man and Dracula. I also loved the Guinness Book of Records and particularly the crazy human subjects in those books.

With your own writing, do you work out an outline for plot and characters beforehand or are you more inclined to just start and see where it goes?

In the beginning, I started without much of an idea where I was going and that just ended up costing me a lot of wasted time. I did this because Stephen King did it and I thought that was the only way. Since then I’ve learnt a lot about doing what works for you. I now outline scenes and write a paragraph or so for each one so I know roughly what action will take place. Doing this allows me to write around 2200 words per hour.

I write the first draft as quickly as I can, then work on adding more internal monologue, characterization, and touching things up. I usually like to go through the story two or three times.

Your novels are creative works of fiction but how much do you let real life influence your writing?

I take bits and pieces of everyone I’ve known. I use events and stories and anything that is real life where I can. I’ve many traits and stories from people I know. You must. The littlest things matter. And it’s all real.

When writing, do you have a target for how long the novel should be? Or perhaps you work with a completion date in mind?

I probably do both. I try to aim for around 90,000-100,000 words. I seem to be able to hit that, except for Murder Inc., which went well beyond. The date is really only when I would like to have it out, but it does regulate the self-pressure on me to get a move on!

I understand you work full-time and have a family with young children, so how do you structure your day? Do you have a designated time to write?

I always get up around five on weekdays and 6ish on the weekends and get a thousand or so words done before anything else. If I get a short break at lunchtime I’ll try to do a little more, and then another hour at night. I track each session no matter how small so I can see how productive I am. But I can always do more!

With such a full schedule, how do you like to keep in shape?

There’s always time for exercise. If I’m not doing something intense every day, I get tired easily and aren’t as productive writing. Getting up early requires it. Skipping (jump rope) is my favourite high intensity workout.

Coffee or tea? Or something else?

Coffee. Lots of coffee. Too much coffee.

So, what has been the hardest thing about writing? And is there one particular edit that was especially tough for you?

Making the time. It doesn’t all happen unless you’re in the seat for long hours. If you don’t, it’s like stop starting, and you never get any momentum. But when you manage to get some consistency, the momentum flows. It’s like magic.

Do you have an interesting writing quirk?

I generally use the names of people I know. In my next book, all the peripheral characters will have names of kind readers.

Some people say don’t outline, it crushes creativity. That’s rubbish. You have to do what works for you. Anyway you can. As long as you end up with a decent result.

Like most creative people, I know you also love music. If I were to turn on your iPod or car stereo right now, what would I find playing?

I go through phases, but at the moment, it’s just a mix of top 40 stuff. I’m enjoying Flume, Coldplay, Troye Silvan, and Lost Frequencies. I need music. And although some of my friends criticize my breadth of tastes, I’m glad I’m not confined to one style. I can find a beat or melody in most things.

Great variety of music! Would you opt for background music when writing?

Are you reading anything at the moment? Or perhaps you can tell us if there are any writers who’ve inspired you?

I’m reading The Pillars of the Earth by Ken Follett, though I have read this before (a long time ago). Follett is an excellent story teller. He sets things up very well early on so you know at some point different things will have relevance.

Early inspirations were Stephen King, Robert McCammon, and Richard Matheson. These days I’m inspired by other indi-writers and the results they have achieved in the publishing world.

Who is your favourite literary character? Why?

Probably Ayla from Jean Auel’s Earth’s Children series. Determination and perseverance personified. Some of her hardships were unbelievable. But she never gave up. Never made an excuse.

I love Pillars of the Earth and the Jean Auel series. Both those authors have very “detail heavy” novels. Follett is very descriptive and Auel does vast amounts of research. What’s your opinion on how much description and research to include? Do you think there can be too much?

It’s a balance, of course (easy answer). There were pages of Jean Auel’s work that were too detailed and difficult to read. Follett’s I didn’t mind so much as I was fascinated by the period. There’s definitely a point where it becomes too much though.

I probably lean towards not enough. I try to space it out through the story and keep with a paragraph or two, at most, of description. Readers nowadays want story, story, story. I’ve made the mistake in the past of too much internal monologue, so that’s something else of which I have to be conscious.

Generally speaking, what do you think makes a good story?

You mentioned you follow other indi-writers. As an indi-writer yourself, how did you go about publishing initially? Has that changed now that you have a few novels out?

I was intent on getting published through traditional channels. I entered a first book contest and had no result. This was back in February 2013 with a little story called Cinema 13. After that failure, I looked into Smashwords and eventually Amazon and I realised it was pretty easy.

I still like the indi route. Amazon is great to work with. It’s all about releasing quality stuff and letting the readers decide if it’s any good!

And finally, what is the best advice you received on becoming an author? What knowledge would you pass on to aspiring writers who are reading this?

You have to write a ridiculous amount. Imagine writing as much as you can and then double it. Triple it. The more you write the quicker you’ll be successful. There is no substitute for it.

Awesome! Well, thank you so much for taking the time to discuss novels, writing and life in general with us. For those interested in future updates on what Owen is up to next, you can find him either on his blog at http://owenbaillie.com/ or via Facebook at Owen Baillie